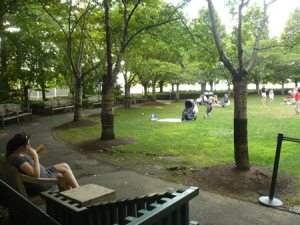 Quick view of the circle of death at Pumphouse Park.

Yesterday, November Project NYC met at Pumphouse Park, a small enclosure near the Freedom Tower with a circular path lined by trees and benches. I rode my bike down (six miles both ways) and enjoyed the early morning darkness of the west side bike path). Once I saw that circular path, I knew that we’d be running around it forever. And I was right! The workout included: run one and a half loops around the circle, and exit the circle to do ten burpies; re-enter and run a quarter circle, exit, and do ten squats; re-enter and run to the beginning, do ten dips using a bench, and repeat. The workout was so high intensity that it lasted 25 minutes instead of 35. I did something like 60 burpies, 60 squats and 60 dips, which left my shoulders and back sore today. Great workout! #weekendearned.

Jim is angry after doing so many burpies!

I followed up my bike ride and workout with a six-mile walk around the Central Park loop (I took the day off work). Walking through the Park during a sunny day versus running it at 5:30 a.m. in the dark makes a huge difference, and I reconnected with the beauty of the trees and the views of the City. I have tons of gratitude that I am able to live in such a great City and have easy access to this amazing park.

Central Park loop at the northeast corner of the reservoir.

Love the West Side.

I also had dinner and watched “Ten Things I Hate About You” with my friends Patrick and Scott, mostly because Scott had never seen the movie (seriously!?), and in part because why wouldn’t we watch classic ’90’s teen romantic comedies on a Friday night?

Today was a rest day. I needed to rest my legs, especially after two intense NP_NYC workouts this week. Also, my right quad and hip were a little more sore than my left (which wasn’t sore at all), which is a sign that I need to keep stretching my right hip and IT band and listen to my body. Even though my injury has mostly healed, the doctor and physical therapist both said that I would have extra soreness for many months, and to rest when needed. So, I took the opportunity to spend this beautiful Saturday in the sun and on my feet, but not running.

The view from Smorgasburg in Williamsburg.

I went to Smorgasburg with Eric, one of my best law school friends. We got ramen burgers and sat by the Williamsburg “beach,” which is really just a sliver of sand and a rocky strip of the Hudson River. On our way to explore the John Lennon Educational Tour Bus, we saw a group jamming on bass, keyboard, and drums, and a guitar was sitting unused. I pointed toward the guitar, and the bass player gave an approving shrug-nod, so it was off to the sweet jammy races. I switched to bass later, and we played an impromptu version of “Uptown Funk” with an eight-year-old kid who just killed it. Numerous people recorded this, and I will search the Internet to find this kid (wow, that’s not creepy out of context at all). We also became the backing band for the Lennon folks’ raffle, and jammed on various chord progressions and Beatles’ songs. I used to play in bands, so this was such a treat! I miss playing live so much, so any chance to strap on a stringed instrument and let ‘er rip makes for a good day.

See? I was cool once.

Eric and I toured the Lennon bus, which is a state-of-the-art mobile recording studio run by the non-profit John Lennon Educational Tour Bus. The group drives around the country providing music and production lessons to kids. We got to watch a music video made by some kids in LA that featured a song about mustaches fighting for new territory against unicorns. It made Phish songs (ex. from Phish’s “Stash”: “Pulling the pavement from under my nails / I brush past a garden, dependent on whales”) make infinitely more sense than they previously did, especially when a magical event occurred that made all the mustaches and unicorns do gangnam style. 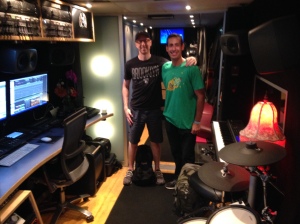 The Lennon Bus is basically a musician’s playground.

We ended the day with some tasty milkshakes and stroll across the Williamsburg Bridge. Even on my off days, I can’t help taking long strolls.

Anyway, I’ll be back at it tomorrow with a 16-17 mile run along the West Side greenway. Good luck to everyone doing the NYRR marathon tuneup!