Here’s what I’ve been up to running-wise since the Marathon:

I took six days off from running because I woke up the day after the Marathon with left ankle pain. I had never experienced this pain before, and did not feel it at all in the hours immediately following the Marathon. My left ankle hurt every time I walked, and felt particularly angry with me any time I tried to run. So, I iced it, elevated it, and took Advil for two days. After that I just took it easy until Saturday, when I tried to run with Melissa. After a quarter-mile, the pain was too much, so I stopped.

Our NP_NYC group ascending onto the Highline, about to confuse/elate/anger tourists (repost from Instagram)

And then on Sunday, the pain had almost completely vanished. Odd, but a welcome change! This allowed me to participate in #betterthanbedtime, a November Project nationwide event during which all 26 NP tribes gathered in their respective cities at 3:33 p.m. and ran unpredictable routes through the streets, stopping occasionally to do exercises. The run culminated in a social gathering at a bar (in NP_NYC’s case, the basement of a bar near Grand Central Terminal). We ran about 4 miles, including a stretch on the Highline, did squats, burpees, a handheld shuffle resembling a hora, and nearly killed ourselves in traffic. Couldn’t have asked for a better Sunday, or a better return to running.

Yesterday I hit the gym for core workout, and then joined up with John Honerkamp’s Lululemon run club. The run club meets every Monday at 7:15 p.m. at the Lululemon at 65th Street and Broadway across from Lincoln Center and does various running workouts in Central Park. This week’s workout included a mile warm-up jog to Cat Hill, 18-20 minutes of Cat Hill repeats (run to the top of the Hill, run back down, run halfway up to the cat statue, run back down, repeat), and a cool-down jog back to Lululemon. A lot of NP_NYC folks came to the run in addition to many new faces. I completed four full repeats in 19ish minutes, which equates to just over 3 miles. Also got to talk to some NP_NYC folks who I don’t usually get to hang with, which was really nice. 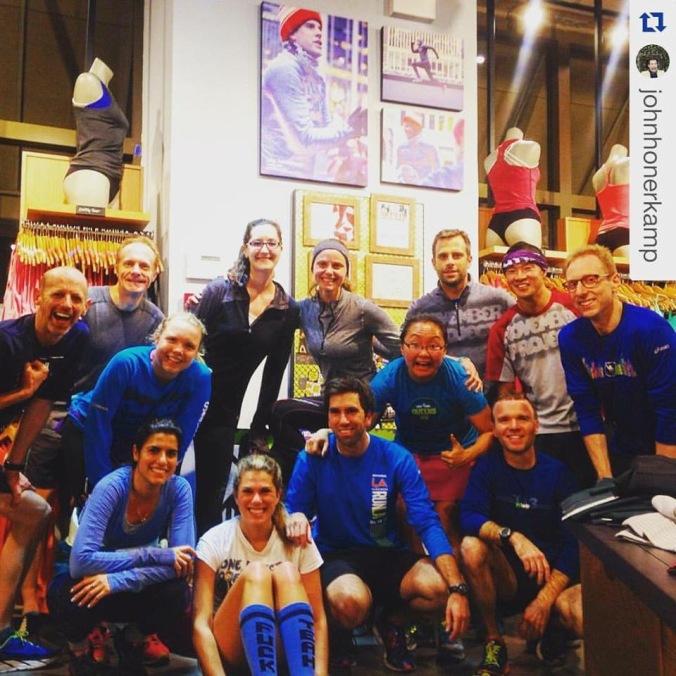 What’s up for the rest of the week? I’m going to do a MAF test either today or tomorrow to gauge my aerobic fitness. I’m guessing that I’ve taken some steps back because of all the racing, so it’ll be good to see what I need to do as I prepare for my next group of races. I’ll also hit NP_NYC for both sessions tomorrow (Happy Veterans Day!), and probably do a Central Park loop on Thursday. I’m still up in the air about the NYRR 60k because of my ankle, so I will see how I feel as the week progresses. While I really want to run my first ultramarathon this weekend, I do not want to cause any permanent injuries to my body. Oy uncertainty!

Hope everyone else is recovering well from the NYC Marathon!

4 thoughts on “Getting Back to Running After the NYC Marathon!”