Hey! It’s been a long time since I updated my blog, but here we go.

Because I haven’t written for so long, I wrote a lot! Therefore, I’ve decided to break it down into three separate blog entries: 1) a summary of my training throughout 2016 and my Boston-specific training; 2) a race recap; and 3) an analysis of my race, and what’s in store as I train for the Marine Corps Marathon on October 22, 2017.

Honestly, 2016 was a difficult year in terms of training. An injury to my right hip flexor muscles and adductor kept me sidelined from approximately February through mid-April. In May, I ran the 2016 Brooklyn Half only 7 seconds off my half marathon PR. That race reassured me that I had not lost too much fitness, but showed just how much work I would have to put in if I wanted to improve. I also hated every step of it, and entered the “pain cave” for the first time in my running career. I then participated in the New York City Triathlon in July, which was an awesome experience but definitely took time away from running. 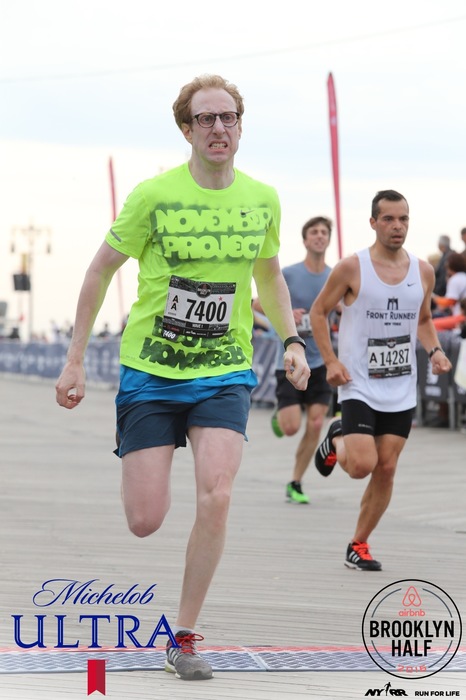 Brooklyn Half: not a good look, especially for a non-PR time!

Then, in August, just as I was building my mileage, I got a once-in-a-lifetime last-minute opportunity to attend Burning Man and play guitar in a Phish tribute band. Although this story deserves a post of its own, I ended up running the Burning Man 50k on approximately 25-30 miles per week of training, with one long run of 18 miles. Not my best race, and definitely not the best way to build up the miles leading into fall marathon training.

When you run an ultramarathon in the desert, you get water refills from this guy.

Bringing the music of Phish to the desert!

Upon return to New York, I ended up with bursitis in my right hip, which sidelined me for another two weeks. More importantly, I missed at least one 20-miler because of it before I went to the doctor. When I was finally able to run again, I squeezed in two 20-milers before the Marathon and ran a small half marathon PR in a tiny race in Brattleboro, VT, all the while nursing an ever-tightening left ankle. Despite mentioning said ankle to my doctor throughout the year, he told me to keep stretching it, but not to worry. 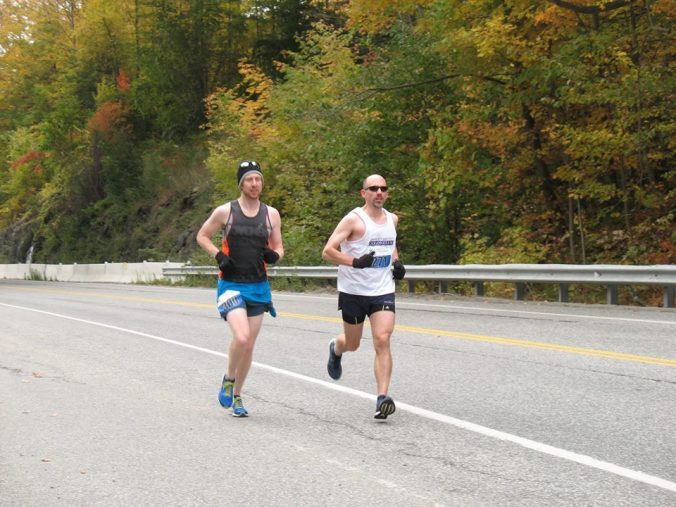 Catamount Half Marathon: 1:19:56, 2nd overall to this guy, Jason, whose parents lived along the race route. Super nice guy!

That said, on November 6, 2016, I toed the line at the New York City Marathon having averaged 35 miles per week from June through November, with a peak week of 50 miles. Not terrible, but definitely not the volume necessary to build the aerobic capacity to make a big leap in my marathon abilities. Also, as you can probably guess, the lack of consistency across the year made it difficult to predict what would happen after the gun at 9:50 AM that morning. Suffice to say, I could not have asked for anything more when I crossed the finish line in Central Park with a 62-second marathon PR.

Chris, Jamil, Me, Myles, and Ryan: all sub-3, all within 2 minutes of each other!

When I analyzed my race, however, I was able to identify a pretty obvious issue. I ran the first half of the race in 1:26, approximately 6:33/mile. The second half clocked in at 1:30, or 6:52 mile. While New York is generally a positive split course, most strategies would favor a one- to two-minute positive split to account for the Queensborough Bridge and the Fifth Avenue hill. Such a strategy would require one to run an even effort throughout the marathon.

So, why did I finish with a four-minute positive split? In my opinion, there were two main reasons. First, I set way too ambitious a goal of running 2:50, so I went out faster than I should have. That led to me slowing down in the final eight miles of the race. Second, my training, which lacked both volume and consistency, failed to let me develop the muscle endurance required to keep turning over the legs in the late stages of the marathon. Based upon that, I decided that for Boston, I would increase my weekly training volume, and try to run at least six days per week, even if some of those runs were short. For the first time I ordered a custom training plan from NYRR’s Virtual Trainer program. The plan was set to start on December 27, which meant that I would use the time between mid-November and late December to build up a good mileage base.

However, after taking a week off after the NYC Marathon and running for two weeks, the tightness in my left ankle sidelined me for two more weeks. Then, once I regained my range of motion in my ankle, I got a bad cold, which sidelined me for another week. Then, on Christmas Eve I got the flu, which sidelined me for yet another two weeks. Boom boom boom! Once I finally recovered, December 27 had passed, and I had barely run since the end of November. Although I had tried to maintain fitness by cycling, I had not hit the pavement in over a month.

So, I officially kicked off my Boston 2017 training on January 3, running an easy 4 miles on the treadmill, with four strides at a 5:00/mile pace. Not particularly inspiring, but a start. From there I ran 11 miles my first, week, followed by 28, then 32, 39, 37, 42, and, finally, 52 miles in a single week, with a long run of 17. I followed that up with five more weeks at 50 plus miles, with a peak of 56 in my last week. I got in three 20-milers, with the last two containing some marathon pace miles. I ran 6-7 days per week, and noticed that I was recovering from runs much faster than in previous cycles. I used my “The Stick” to roll out my muscles every night, which really helped any lingering muscle soreness. Instead of incorporating numerous hard race efforts into my training, I treated races as my tempo runs. I really tried to stick to the 80/20 method of training, wherein you run approximately 80 percent of your miles at an easy to moderate pace, and 20 percent of your miles at a hard effort. I experienced no new injuries or discomfort, and felt myself getting stronger each day. I made sure to do my own core exercises at least two days per week, and noticed a difference in my overall strength.

So, when I toed the line on April 1 at the Boomer’s 4 miler in Central Park, the one true tune-up race I scheduled, I felt confident that I would be able to throw down a strong effort. My finish time of 22:54, which was good enough that day for 10th overall and first in my age group, had me executing a solid race plan and running a final mile of 5:19, faster than I’d run in a good while. A few days later, I equaled my PR on the 3.3-mile November Project NYC PR Day course.

Boomer 4-Miler: I swear I’m not angry at Mikey Branigan, the winner of the race! I’m just bad at pictures (and race bibs).

Those two races gave me one critical piece of information: My fitness was strong, but had not improved so much that I was going to run a massive PR in Boston. If anything, I might be able to run 2:53 or slightly under with the right weather conditions. Any attempt to push for faster than that, however, and I’d be back in positive split city.