Now that I’ve recovered physically and mentally from the NYC Century bike tour, I’m putting the bike down for the next two months to focus on my fall road racing schedule: The Bronx 10 Mile, Staten Island Half, TCS NYC Marathon, and the NYRR 60k. I’ll ride to cross-train, but definitely no more epic 80-mile training rides for a while.

I also snuck in a run yesterday on my lunch break, running approximately six miles, three of them at my goal marathon pace of 6:50 minutes per mile. Even though I try to do most of my runs at or below my Maffetone maximum aerobic heart rate, I wanted to test out my goal pace, and learned that, after maintaining that pace for three miles, I was only about five beats per minute above my Maffetone max. Starting to feel like I can maintain it throughout the whole marathon!

This morning, though! What a workout. (more about that after the jump). 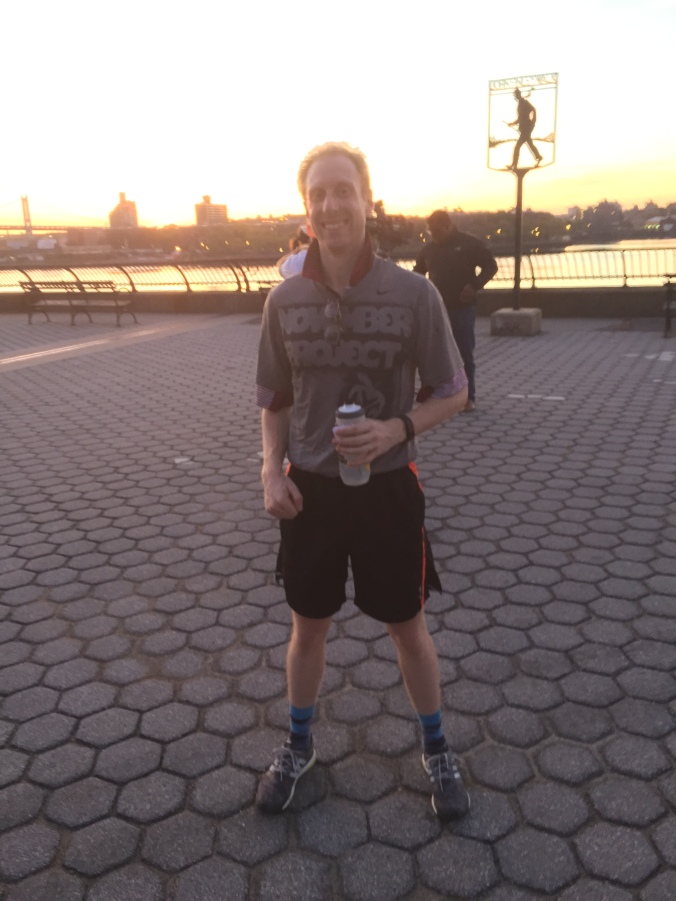 Golfing with the November Project as the sun rises over the East River. Photo credit: Katie McEvoy (the awesome sister)

Paul, one of NP_NYC’s leaders, sent out this Facebook message prior to the workout:

1) #GrassrootsGear is acceptable at all times
2) Shorts must come below the hip, yet above the shin bone
3) If you sweat through your shirt, it is acceptable to take it off, but only in the presence of your caddy
4) And as always, make your own rules

He also posted this video clip from “Caddyshack”, one of my all-time favorite movies, and various pictures of John Daly, America’s favorite oddly-dressed bad boy pro golfer. How fun! What could he have in store for us?

At 4:45 a.m., I pulled on an old pair of blue argyle socks and donned a striped golf shirt under my #GrassrootsGear. Replaying all my favorite “Caddyshack” quotes in my head (“Oh Danny, you don’t have to go to college. This isn’t Russia. Is this Russia?” and “So I got that goin’ for me, which is nice,” and of course “be the ball“), I skipped out the door and headed to the workout with my AWESOME sister (happy, Katie? ;)) and our awesome friend Sarah.

Here’s how the workout went down: Every “player” received a golf score card with nine “holes.” Each “hole” had a par and letter listed. The par indicated the number of stair loops you had to run for that particular “hole,” and the letter represented the exercise that you would do upon completing the running. So, for example, the first hole was a par four with a “P,” which meant that you would run four stair loops and then do pushups. To shoot par, you had to do four pushups. To birdie, you had to do eight; for eagle, 12. Players could partner up, but no groups larger than four (just like golf . . . get it?!).

If that’s not clear, here’s the instructions from the scorecard: 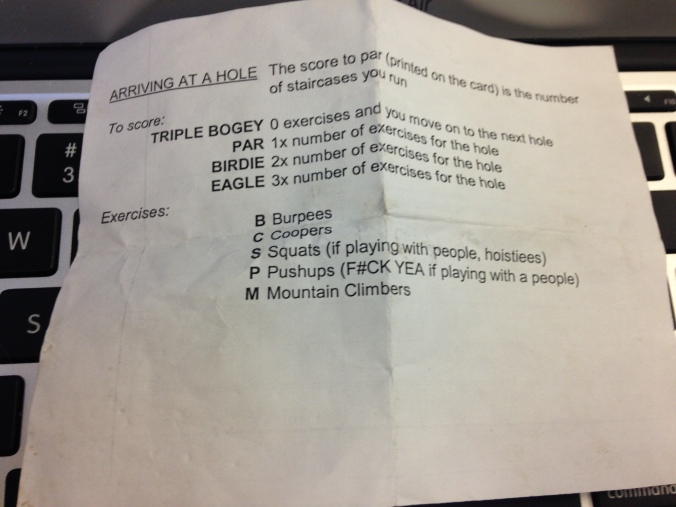 Instructions for an interesting variation on golf!

Many players embraced the theme, and I saw lots of argyle socks and polo shirts underneath #GrassrootsGear. One player wore the full golf outfit: khaki shorts and a polo complete with leather belt. Great look, but (according to him) not exactly conducive to squats!

I partnered with my new buddy Rob, and we took off at a quick pace through the first hole, a par four with pushups. Each time we headed back toward the start, the sun rose a little higher, the blues cascading to reds and yellows at the horizon. We talked a bit mostly focused on getting through the workout, and eagled the first hole by doing 12 fuck yeah pushups (face your partner, do a pushup, slap five, and repeat). 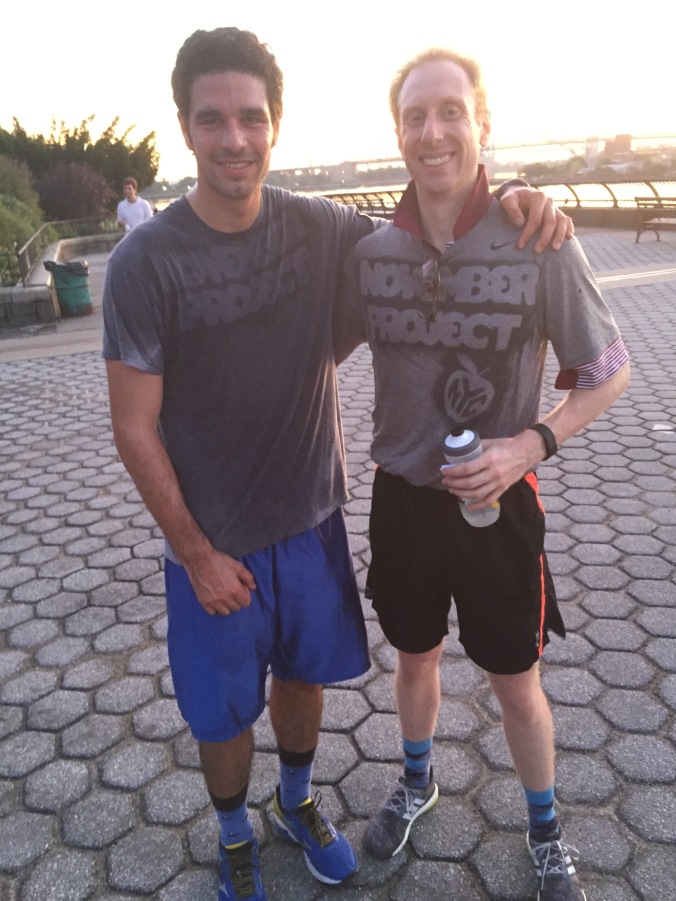 The second hole, a par five with burpies, was a real bear, so we decided to birdie with ten burpies each. We followed that up with an eagle at the par four third hole, putting in 12 mountain climbers each, and scored a hole in one on the par three fourth hole by doing nine squats. We eagled the fifth hole, a par four, by doing twelve fuck yeah pushups, and I finished up with a second hole in one at the par three sixth by doing nine mountain climbers. At that point 35 minutes had ended, and we congregated for the ritual group picture.

Paul asked whether anyone had completed six holes, and two or three players and I raised our hands. No one finished more than six (it was a lot of running!). He asked our scores, and apparently another James (visiting from London!) and I had the lowest scores of the day. Paul presented us with a wooden plack, and we took a picture with the Tribe. 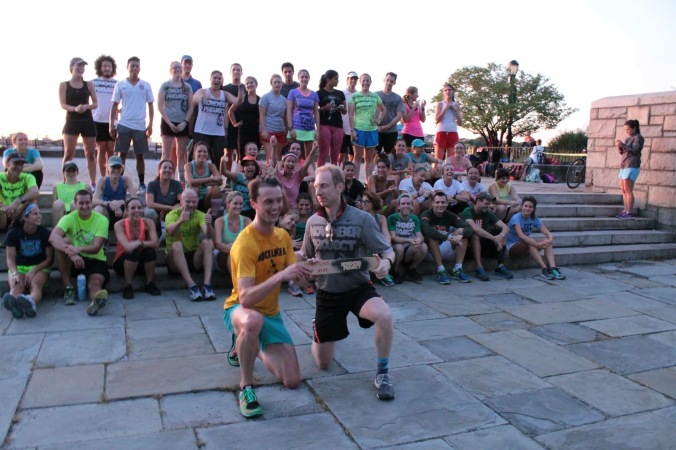 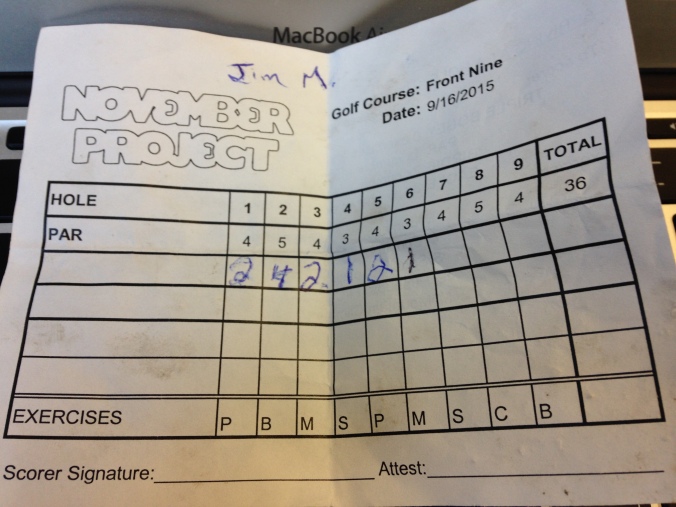 By far my best golf score ever!

Later, Paul presented “The Stick” to Maggie. The stick is symbolic of the Positivity Award presented to someone who shows up consistently and gives it her all. We held a short “Passing of the Stick” ritual, in which the stick was tossed from one member of the Tribe to Maggie. Congrats, Maggie! Get out there and kill the NYC Marathon!

Every week I meet new people, throw a ton of high-fives, and head to work ready to tackle the day. This morning was especially fun, considering the theme, how people embraced the theme, and how hard everyone worked. It’s inspiring to get up and see people pushing themselves, and to watch someone who looks like they’re about to give up find that next kick of energy when you throw out a compliment and a high-five. That’s why I #justshowup.